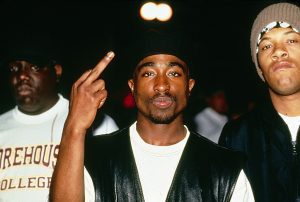 Rare footage of Tupac surfaced on Thursday after the late rapper’s former bodyguard shared the clip on social media.

2pac‘s former bodyguard, Kaiso Aaron Allen, shared rare footage of the legendary rapper on Instagram, Thursday. The clip comes from the later rapper being on tour with Digital Underground back in 1990.

“32 YEARS LATER REAR FOOTAGE OF ME AND TUPAC SHAKUR WHEN I WAS HIS PERSONAL BODYGUARD,” he wrote in a post, according to HipHopDX. “1990 I WAS CHUCK D BODYGUARD AND LATER BECAME TUPAC IN THE FEAR OF A BLACK PLANET TOUR. CHECK OUT A YOUNG PAC HE WAS DANCING WITH THE GROUP DIGITAL UNDERGROUND.”

Being in 1990, the video comes from before Pac’s career exploded in 1991, following the release of his debut studio album, 2Pacalypse Now.

Back in 2021, an 83 GB hard drive previously owned by another former bodyguard for Tupac, Frank Alexander, went to auction and was estimated to be worth between $600k and $1.2 million.

Coincidently, the video of Pac is circulating online as fans celebrate what would’ve been the 50th birthday of the Notorious B.I.G. Both rappers were killed during the infamous East Coast-West Coast hip hop feud of the 1990s. Lil’ Kim held the 2nd Annual B.I.G. Dinner Gala in his honor in New York City on Friday.