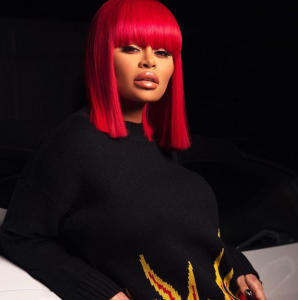 At this point, Blac Chyna must know some things about crisis management. The celebrity seems to hop from one crisis to another. Recently, she was caught on video allegedly kicking a woman in the stomach. She also just attacked Alysia Magen over her Kim Kardashian comment.

So it makes sense that Blac Chyna will be taking the role of a crisis publicist in a new film, Secret Society 2. Apparently, she nails the part.

In the film, Chyna plays a publicist named Vicki who specializes in crisis management and will do anything for her clients. Two of these clients are Celess and Si Si, rising stars in Hollywood who have baggage that could destroy their careers. Just as they’re about to get their big break, things take a turn for the worst.

Chyna will be starring in the film alongside Reyna Love, Erica Pinkett, Jeremy Meeks, and Vivica A. Fox. The film will also include some original music from Chyna, featuring three of her songs. According to Miasha Coleman, an executive producer on the film, the Secret Society team is very happy with Chyna’s performance. “Blac Chyna is definitely no stranger to headlines and publicity, so naturally she nailed her part as a publicist!” Said Coleman. “We are also excited to showcase her music in Secret Society 2. They fit the vibe of the movie perfectly.”

Chyna’s performance is in the can, and the film will be released on Amazon Prime next month, July 29. Let us know what you think of Chyna’s new role in the comments.