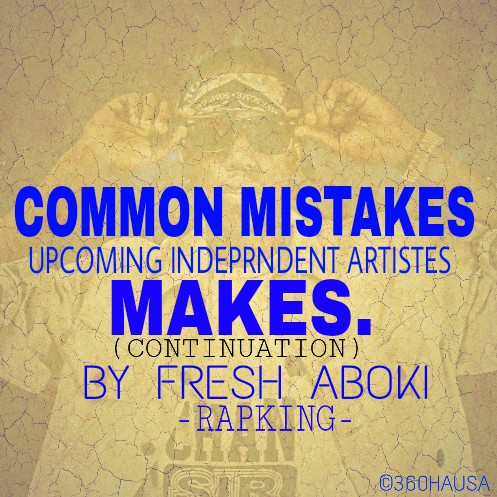 As promised Last Week, this important and interesting article will continued and keep to digest a some mistakes that Upcoming artists especially independent usually making without a knowledge of the consequences of that mistakes.

We’re Giving it to you because we need a change in the music industry and we need to your hustle pay you. Below is the continuation enjoy.

One Of the mistakes upcoming artistes make is they release Album or E. P too early. Why the rush when you have a long way to go? The best way to be known is by dropping singles. Promote those singles with all your might until people get to know that single. Drop as many singles as you can until you are famous. An example is Teni. Despite her fame and years in the industry she only dropped an E. P not long ago. And the only song that trended was “billionaire” because she could not focus on promoting all the songs.

Lastly, The biggest mistake upcoming artistes make is lack of promotion. They find it so difficult to promote themselves. But why would you drop a song when you know you can’t promote it? The first thing you are supposed to put at the back of your mind when dropping a song is promotion. Because with a good content without promotion nobody will know it.

Thanks For reading. Stay With 360Hausa For more interesting and important latest Updates. Watch Out For  Next Article, Next Week.

STAY CONNECTED WITH THIS TALENTED ARTIST & WRITER OF THIS ARTICLE.

A Time Of ThanksGiving and Prayer #RPC2020 1.Johannesburg
Also known as Joburg, the South African city is considered the wealthiest city in Africa with an estimated wealth of $248 billion. The city is home to few billionaires and about 16000 millionaires.

2.Cairo
One of the world’s most important cities historically is also home to more billionaires than any other city in Africa. The city accounts for 22% of Egypt’s economy.

3.Lagos
It is the most populous city in Africa with over 22 million inhabitants. Lagos has 2 dollar billionaires and over 5400 millionaires.

4.Nairobi
The capital of Kenya has a population of about 4.5 million people with an estimated total wealth of $49 billion. Nairobi is the wealthiest and most visited city in East Africa. There are about dollar 6200 millionaires living in the city.

6.Paarl Franschhoek & Stellenbosch
A large number of retired people in this category have moved to these towns over the past decade. The three cities together have a total wealth of $47 billion with 2800 millionaires and 2 dollar billionaires.

8. Pretoria-  The city is an administrative capital of South Africa and has a total wealth of $45 billion

9.Casablanca – It is the largest city in Morocco with an estimated population of 3.7 million people. It comes in 9th place with a total wealth of $39 billion, There are 2 dollar billionaires.

10.Accra – This is Ghana’s capital and the second west African country to make the cut.The West African city is a centre for manufacturing and marketing. are currently above 100 people in Accra with a net worth of $100 million.