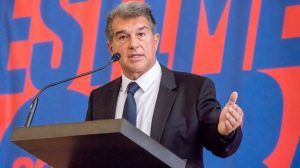 Dembele Is No Longer A Barcelona Player – Joan Laporta.

Barcelona president, Joan Laporta, on Wednesday, insisted that forward, Ousmane Dembele, is no longer a player of the club. Laporta said this while issuing an update on Dembele, who is currently a free agent after his Barcelona contract expired last week. Dembele has a number of suitors in Europe, including Chelsea and Paris Saint-Germain, but Barcelona still remains hopeful of coming up with an offer that would convince the France international to sign a new deal.

Speaking on Wednesday at the unveiling of new signing, Franck Kessie, Laporta said: “No precise date has been set for Dembélé’s renewal.

“He is no longer a Barça player, but an offer was made to him as a result of sporting interest.

“They have answered. At the moment, they do not accept it, but they do not reject it either.”