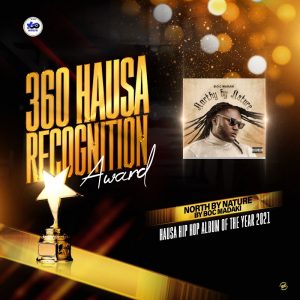 Hausa Hip Hop Arena receives not much Albums in 2021, As some artists focus on giving hit songs and some Dropped EP. But BOC Madaki continue with his tradition of giving might project each Year, B.O.C Madaki is an elite MC. On his latest album ‘Northy By Nature.

Northy By Nature is a solemn offering of societal viewpoints from a personal perspective. At the end of the album, Madaki addresses the loss of his father on ‘Wasika Zuma Sama.’

Anyone that listen to Hausa Hip Music, cannot doubt when 360Hausa recognized NORTHY BY NATURE as Album of the year 2021. Congratulations.