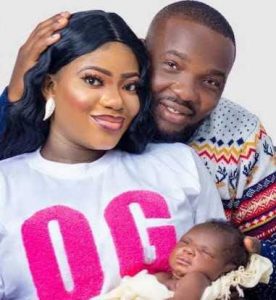 If I Die Or Anything Happens To Me, Hold My Babymama Responsible – Yomi Fabiyi Cries.

Popular Yoruba actor, Yomi Fabiyi has cried out on Instagram accusing his child’s mother, Amarachi Grace Oreofe of threatening his life. He also accused her of domestic violence and released videos to back his claims.

In one of the videos he shared, he’s seen carrying his and Amarachi’s newborn son. Police officers are seen in the video which was recorded past midnight.

“She ran away after assaulting me,” Yomi is heard saying in the video.