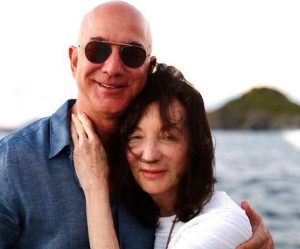 Shirtless photos of the billionaire on vacation have caused skeptics to doubt whether the 57-year-old achieved his physique naturally.

After shirtless photos of former Amazon CEO Jeff Bezos on vacation in the Caribbean arrived online earlier this week, many were surprised to see how much the 57-year-old’s physique has changed. While some took the time to send the entrepreneur compliments on his hard work, others were quick to assume that he must’ve leaned on HGH or steroids to help him achieve his current body.

“For those who say money can’t buy happiness… In just this picture, money bought a yacht, private bay space in St. Barts, HGH, and Viagra,” one Twitter user who came across the snapshots wrote. “And Lauren Sanchez,” someone else added, name-dropping Bezos’ beautiful girlfriend, with who he’s reportedly been on a PDA-filled vacation for a week now.

The internet may still be speculating about Bezos’ health regimen, but a source with direct knowledge has told TMZ that the rumours of HGH or other enhancers are completely false. “The 57-year-old Amazon titan has been working out like crazy with celeb trainer Wes Okerson,” the outlet reports.

“We’re told he was on a strict diet and exercise regimen for months,” they added, also noting that Okerson is currently on vacation in St. Barts right now as well, so it’s entirely possible that he and the billionaire have squeezed in a few sessions overseas.

Speaking of St. Barts – Jayda Cheaves also posted up on the island over the holidays, along with Lil Baby and Meek Mill – read more about that here, and let us know what you think about Jeff Bezos’ HGH rumours below.