Lil Kim and Cardi B have been pals for a while now and their friendship seems to have just been reaffirmed. In an interview with Rap City, Kim labored over her bond with the “WAP” rapper.

“Cardi is like the love of my life. You don’t even know. Like, she makes me laugh… we talk a lot. People have no idea. But she’s my little sister but she’s really my big little sister.” Lil Kim told the host Big Tigger, “believe it or not, she directs me on a lot of things like ‘No, this is what I want you to do’…and I’ll be like ‘Ok that makes sense’. We just laugh a lot too.”

Big Tigger and his guest then go on to talk about involvement with other rappers and how important it is to collaborate with newer artists. When asked how she approaches this, Kim had this to say:

“That’s all I’m doing. You know I’m only lending my personality and my image to the up-and-coming new artists. That’s it. I mean at the end of the day Imma always have fun. Whether I make another song or not I’m gonna always be in music obviously, but I’m going to always make sure the newer artists who I connect with– from my hood… I’m going to always reach my hand back out. I like that.”

She then proceeded to introduce two new artists that were brought with her to the interview, Yume and Tayy Brown. Yume has been described as a mix of Aaliyah and Travis Scott and Lil Kim made sure to show her all the love and support, boasting about her accomplishments thus far. Already co-producing tracks alongside Chris Brown and Young Thug, the young producer is sure to have great potential ahead of her.

The second artist Kim brought to the interview, Tayy Brown, is an up-and-coming rapper from Maryland who has already released multiple EPs and a couple of albums while staying independent. This new partnership with the Queen Bee could be exactly what he needs to propel himself into mainstream audiences. 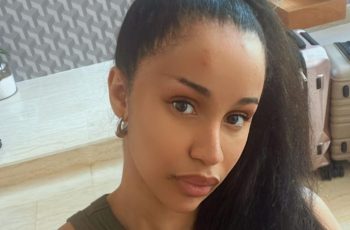 Cardi B Has Message For Blogger Tasha K: “Send My … 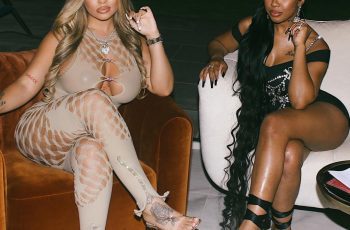