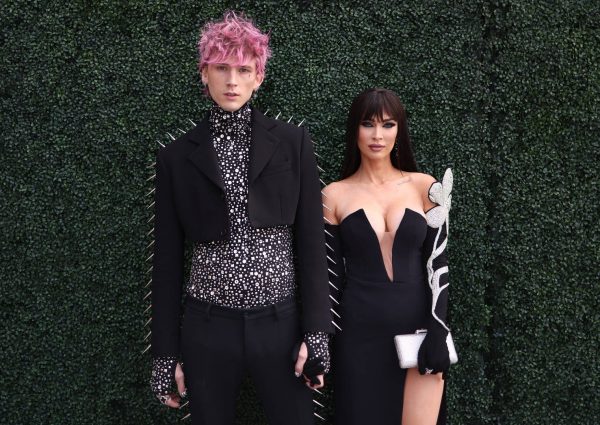 Machine Gun Kelly hinted that he’s married to Megan Fox and that she’s pregnant during his performance at the Billboard Music Awards on Sunday night.

“I wrote this song for my wife,” Kelly told the crowd while introducing the song, “Twin Flame.”

“This is for our unborn child,” he added as the sound of a heartbeat played.

The heartbeat sound had previously left fans wondering whether he and Fox are expecting, but he decided to “plead the Fifth” when asked about it following the release of his latest album, Mainstream Sellout.

“I was actually wondering if anyone would pick up on, so I’m going to plead the Fifth on that one and just let you guys have that to guess what it is,” he said on Instagram Live at the time. “But yeah, it’s … that’s a rough one to talk about.”

Kelly and Fox have been dating since May 2020. The couple announced they’d gotten engaged in January 2022.

“‘Yes, in this life and every life’” Kelly wrote in an Instagram post at the time. “Beneath the same branches we fell in love under, I brought her back to ask her to marry me. I know tradition is one ring, but I designed it with Stephen Webster to be two: the emerald [her birth stone] and the diamond [my birth stone] set on two magnetic bands of thorns that draw together as two halves of the same soul forming the obscure heart that is our love. 1-11-2022.”

Check out Kelly’s performance at the Billboard Music Awards below.