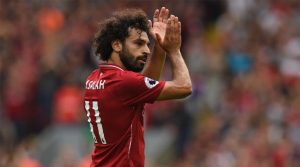 Liverpool forward, Mohamed Salah has finally signed a new long-term contract with the club. The Egyptian has extended his stay at the club until 2025 after he previously confirmed he would not be leaving Anfield this summer.

The 30-year-old netted 31 times in 51 appearances for the Reds last season, exactly the same as his previous campaign.

Salah will remain the main man at the former Champions League winners and will lead Jurgen Klopp’s attack alongside the likes Darwin Nunez and Luis Diaz.

The likes of Portugal international Diogo Jota and Brazilian Firmino will also expect to be involved regularly.

“I feel great and [I am] excited to win trophies with the club. It’s a happy day for everyone,” he said, according to Metro.

“It takes a little bit of time, I think, to renew, but now everything is done so we just need to focus on what’s next.

“My message [to the fans] is the players in the team want to give our best next season to try to win all the trophies.”