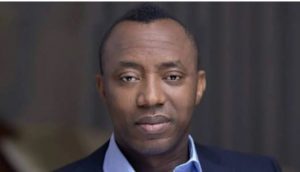 Omoyele Sowore has called for the immediate release of popular human rights lawyer, Inibehe Effiong. Recall that Effiong was thrown into prison over alleged contempt of court. It was reported that the Chief Judge of Akwa Ibom State, Justice Ekaette Obot, on Wednesday, sentenced Effiong to prison for defending a journalist.

In a series of tweets via his Twitter handle, Sowore, who is the presidential candidate of the African Action Alliance (AAC) called for the release of Effiong. Effiong had said Justice Obot sent him to Uyo prison for one month for defending Leo Ekpenyong in a libel suit filed by Governor Udom Emmanuel.

He said Obot who allowed armed policemen wielding AK-47 rifles into the courtroom threatened to jail him for accusing her of being biased and asking her to recuse herself from the case.

Effiong said that two lawyers in the court appealed to Justice Obot, but the Chief Judge insisted that the Lagos-based lawyer must be jailed.

Reacting to the development in a Twitter post on Wednesday, Sowore described the imprisonment of the Abuja-based lawyer as despicable.

The AAC presidential candidate, however, called for the immediate release of the human rights lawyer.

He wrote: “It has come to my attention that a Chief Judge of High Court, Akwa Ibom just summarily sentenced rights lawyer, @InibeheEffiong for a month for doing his legal duties defending an individual that allegedly defamed Gov. @MrUdomEmmanuel. This act is despicable #FreeInibehe NOW!”