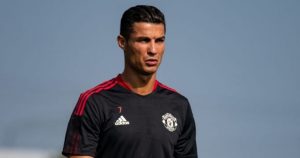 Ronaldo has been heavily linked with a move away from Man United this summer.

The five-time Ballon d’Or winner played under Mourinho during their time at Real Madrid.

“I know from various sources that Roma are trying to sign Cristiano Ronaldo and July 7 could be the date of the announcement. It is an indiscretion, but it circulates insistently in the world of football,” Di Livio told Retesport.

“By chance, I spoke with a friend who works on television and who found out about the negotiations for Cristiano from an important club manager at a dinner a few days ago.

“I know from a good source, from a very accredited person, that Roma is trying to get Cristiano Ronaldo by all means. Details will have to be ironed out, for image rights, but I know he will leave United.”