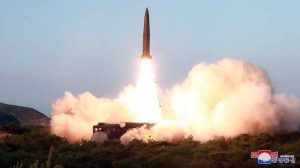 The United States and South Korea have fired eight missiles off the east coast of the Korean peninsula on Monday morning, June 6, it has been reported.

The two countries were responding to North Korea’s launch of eight ballistic missiles.

North Korea had fired eight short-range ballistic missiles from multiple sites in the country into waters east of the Korean peninsula on Sunday, according to the Joint Chiefs of Staff, who called the actions a “serious provocation that harms peace and stability of not only the Korean peninsula but also the international community.”

On Monday morning, seven missiles were fired by South Korea and one by the US, according to the South Korean Joint Chiefs of Staff, which said they demonstrated that “even if North Korea provokes with missiles from multiple locations, (South Korea and the US have) the ability and readiness to immediately strike with precision.”

The missile exchange comes as North Korea intensifies its provocations in the region, with reports indicating that Pyongyang is preparing a nuclear test.

It also comes almost a month after the election of new South Korean President Yoon Suk Yeol, who has given a more aggressive tone toward North Korean aggression a departure from predecessor Moon Jae-in, who had promoted dialogue and peaceful reconciliation.

South Korea has fired back three times this year, after a hiatus since 2017.

North Korea’s launch on Sunday is its third missile test since the start of Yoon’s term and the 17th this year. Pyongyang’s previous launch occurred on May 25 as US President Joe Biden was returning to the US after a trip to Asia.

The missile launches are seen as a show of force and are not aimed at specific targets as the missiles land in the sea.