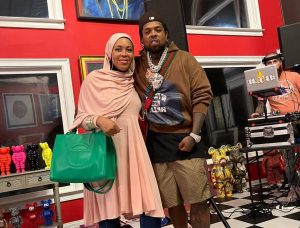 Westside Gunn has never hidden his affinity for wrestling. He loves to include wrestling themes in his music, and last year, he was hit with a lawsuit for using a WWE announcer’s voice. He’s also helped out promising wrestlers financially– he paid for the entirety of an up-and-coming wrestler’s school bills.

Now, Westside is starting his own pro wrestling business. On Instagram, the Buffalo rapper announced that he has founded a wrestling promotion company called 4THROPE. He also said that former WWE NXT wrestler Parker Boudreaux would be his first signee.

“Y’all Done Fucked Up!!!! Meet @theparkerboudreaux the 1st official wrestler W/ 4THROPE,”wrote Gunn in his post. “We’re about to do something the Wrestling world has NEVER scene. EVERYBODY knows I’m the biggest wrestling fan in the world but now I’m about to mix Cultures and present special talent, merch, 4THROPE radio, 4THROPE TV, and again HIGH LEVEL ART stay tuned for more 4THROPE announcements and LINK IN MY BIO we just World Premiered on AEW tonight start it at the 28min. Mark ROPE #GXFR #CULTURE #4thROPE #PARKERBOUDREAUX #FLYGOD.” In the photo, Westside poses with Boudreaux.

This isn’t the first we’ve heard of 4THROPE. In 2019, Gunn announced the company, and said it would be focusing on wrestling merch. He teamed up with Brian XL and House of Glory, and said about the venture, “Just long as we the best at what we do, the sky’s the limit, man. You never know what the fuck this can be. This shit could be the biggest shit in the world. I just know it’s about to be crazy.”