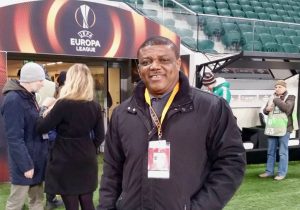 Sports pundit, Churchill Oliseh has said football development in the country is hampered by too many challenges that are beyond the capability of the Nigerian Football Federation (NFF). He said the problem would persist until a regulatory structure and framework are properly put in place. Oliseh disclosed the observations during the Sports Writers Association of Nigeria (SWAN) interactive monthly stakeholders forum in Osogbo on Friday.

Oliseh who opined that the nation’s football governing body has been treating symptoms of the ailment and not the ailment itself added that the problems would perpetually remain until the NFF takes a holistic look at them, identify and approach them with corresponding solutions.

In his words, “You cannot continue to do the same thing the same way and expect a different result. This is why there hasn’t been concrete development in our football sector and why we struggle to raise a formidable team for the nation.”

The former goalkeeper and President, FC Ebedei also revealed that many football clubs in the country do not have a purpose for their establishment.

“This is why only the clubs owned and financed by the government thrive and can sustain the tempo.”

Lamenting that Nigerian football teams can’t meet up with the global standards, Oliseh charged the NFF and its leadership to take the bull by the horn and restructure the game of football to be at par with what is obtained internationally.