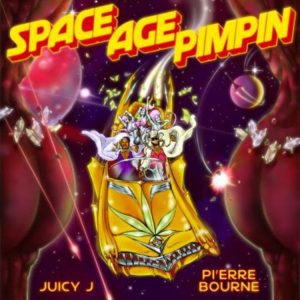 Juicy J has kept busy this year as he has been performing many sold-out shows alongside Three 6 Mafia, he released Stoner’s Night with Wiz Khalifa in February, and he was credited with the production of “Jimmy Cooks” off Drake’s latest album, Honestly, Nevermind.

Pi’erre is known for producing hits such as Playboi Carti’s “Magnolia,” Sli’merre with Young Nudy, and topping the charts with Lil Uzi Vert’s Eternal Atake. His accomplishments as a producer were quickly followed by his success as a rapper.

Earlier this month, J and Pierre started the rollout for the album with the release of the lead single “This Fronto.”

Stream Space Age Pimpin and let us know what you think in the comments.