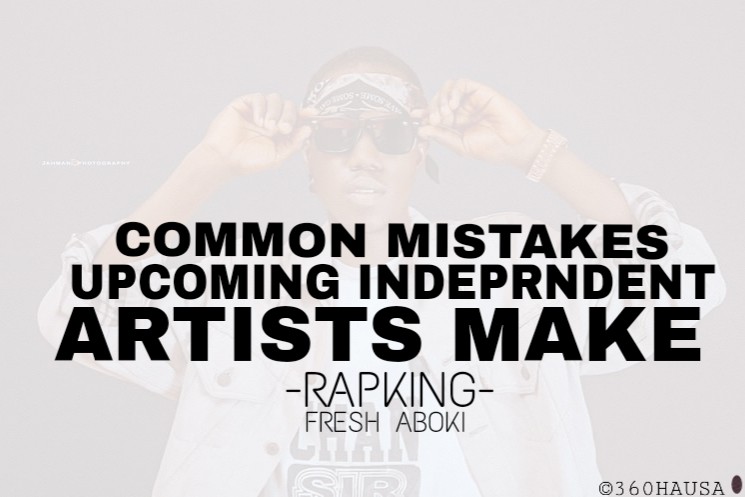 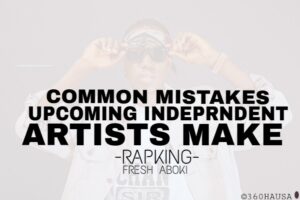 As an Upcoming artist (Rapking) Beat Chest To talk about Their own Mistakes and How to Overcome it. 360Hausa Blog is always trying to help artists on how to build their careers.

Our Upcoming artists are Making The following mistakes:

First mistake upcoming artistes make is They look for managers and record labels. You get things easy when they (managers/record label) look for you because It requires good relationship, understanding and trust which in most cases are difficult to find when you goto them.

Secondly, Lack of Investment. Alot of upcoming artistes find it difficult to invest in themselves. No record label will just come and invest on you when you not package yourself. So,  you just have to start investing in yourself with the little you have. As an upcoming artiste, if don’t have a job or handwork please get one. However, investing in yourself goes beyond just paying popular blogs and promoters and going to good studios atleast push ur craft by posting instagram videos once in a week or on a monthly basis. This way a record label would find you and probably invest in you.

Thirdly, They look for fast money. Upcoming artistes are always in a rush to make money with their songs. You just started music and you’re putting ur songs only on digital platforms like; AudioMack, SoundCloud, Boom play, etc. This is very wrong. You start by putting out free content. Put your songs on free download blogs even if you will use digital platforms. Allow people to listen to ur song for free. Untill people download ur songs and share them you shouldn’t expect any money from ur track. Its so unfortunate that we rate artistes with 2k streams on AudioMack than those with 5k downloads on free blogs. Its so ignorant of you to think you’re a star because you don’t put your songs on free download blogs. They be like “He is a big artist oh! He doesn’t put his song on blogs, na only AudioMack” AudioMack with how many streams??  Some Deceive themselves by boosting fake streams, but the question is who are you deceiving??

To be continued next weekend… Stay Connected With 360Hausa Blog Everyday.

Have a pleasant weekend! Top 10 people that stole one of the largest amount of Money In History. Some Are Evil In Human Kind, and Some People Don’t Thinks When They Want To Steal or act Evil.

1.Bernie Madoff
Bernard Lawrence Madoff was an American fraudster and financier who ran the largest Ponzi scheme in history, worth about $64.8 billion. He was at one time chairman of the NASDAQ stock exchange.

2.Sani Abacha
General Sani Abacha had reportedly stolen between $5-$10billion in his five years of governing Nigeria. Few have been recovered but bulk remains missing

4.Jeff Skilling
He was the CEO of Enron There was serious misrepresentation in earnings reports, and a fake energy crises and serious embezzlement of retirement funds by executives of the company. Over $11 billion was embezzled

5.Ferdinand Marcos: Former Philippine President Ferdinand Marcos was a greedy man. He is widely believed to have taken between US$5 billion and US$10 billion, through government loans, bribes, embezzlement, taking over private companies and outright theft.

6.Saddam Hussein
Iraq’s dictator took money the easy way: he asked. He sent his son and personal assistant with a hand-written note to the bank’s governor, telling him to hand over $920 million

7.diezani alison-madueke
Reports shows that $487.5 million in cash and properties has been traced to the former oil minister, by the anti-graft agency. She is 8th on the list because we couldn’t fully estimate the amount stolen but it was close to a billion $

9.Fujimori’s Peru
allegedly embezzled US$600 million in public funds and used it to bribe politicians, judges and the media.

10.Teodorín Obiang: serves as vice president to his own father.
In 2014, the US Department of Justice seized US$30 million worth of assets. In 2017, French authorities found him guilty of embezzlement confiscated his assets $35 million. We believe he stole close to $500 million