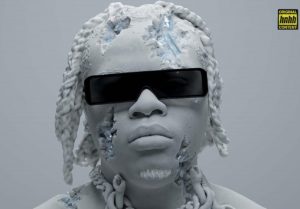 Atlanta rapper Gunna just wants to vibe, that much has become obvious. With his latest studio album, DS4EVER, the 28-year-old “drip” aficionado completes his revered mixtape series with the fourth installment, which encompasses Gunna’s evolution into a trap music mastermind, and reminds us that he is all about using music to dictate a feeling.

Gunna has made a formidable career for himself in the music industry, building off of the blueprint he created with Young Thug as a member of the Young Stoner Life Records roster. Once a background character in Atlanta’s booming hip-hop scene, Gunna has grown to become a frontman, bringing his drip to the spotlight and expanding his wardrobe to usher himself in as a style icon (who previously caught the attention of Rihanna), rhyming over innovative beats as one of today’s most essential rap characters.

Gunna makes everything he does look easy and effortless, and part of that has to do with his consistently sleek, sonically-satisfying production choices. Many have tried to recreate his sound, but there are not too many artists on the planet who can rap almost exclusively about designer clothing and lavish trips, while still keeping the attention of an audience that doesn’t share his tax bracket.

While he’s not shaking up the world with thought-provoking, meaningful lyrics, Gunna instead creates a sort of mood-neutral soundscape with DS4EVER that simply captures a feeling of fun and whimsy. Outlandish lyrics from guests including Young Thug (“I n*tted all over her face and now, she look like a cow,” for example) inject moments of eccentricity and humor, while the production remains a focal point.

Utilizing the same producers that shaped the sound of Wunna — Taurus, Wheezy, and others — DS4EVER doesn’t stray too far from what Gunna has already established at this point in his career. The tracklist suffers slightly in the sense that there aren’t enough truly memorable or hypnotic moments. Some songs – most notably, “alotta cake,” – closely resemble the skeletal structure of other songs in Gunna’s older catalog, like “Cooler Than A B*tch”– the latter sounding almost like a continuation of the former, sans Roddy Ricch. Others sound suitable for a nightclub’s lull before midnight strikes, repeating prosaic themes (drugs, partying, etc.) heard consistently throughout the rapper’s career.

Despite a lack of clear artistic growth, there are a few standout moments that will drive the listener back to DS4EVER. “south to west” is one of the most exciting solo songs from the album, resembling the tumbling trap melodies that Gunna explored during the Drip Season 3 era, think: “Oh Okay.” He also gets personal on songs like “livin wild” (“I just left the hospital, might need another liver/Kidney failures, I tell you this sh*t couldn’t be more realer”), “life of sin” (“I know nothing is forever, but I want this forever”), and “die alone,” in which he sings about not wanting to end up by himself.

The album is flanked by some exciting feature verses from the likes of 21 Savage (who continues to set fire to anything he touches and seemed to cause more of a stir online than Gunna did himself), Kodak Black, Young Thug, Future, Lil Baby, and more. Nonetheless, aside from the inclusion of Chlöe’s vocals on “you & me,” we’ve heard many of these same collaborations, at least on paper, before. Chlöe is the sole female vocalist on the album’s tracklist, continuing a troubling trend in trap music where the men of the genre seemingly don’t interact much with the women. The world has heard so many Gunna songs with Lil Baby, Young Thug, and Future at this point that, on the next go-around, more variety when it comes to vocalists would be appreciated. It would also signal growth for Gunna, who seems to be looking to establish a new chapter for himself post-Drip Season.

Without taking any significant risks with his sound, Gunna managed to create a quietly entertaining album, with multiple songs that will grow on the listener after the first listen. While the quality is what we’ve come to expect from Gunna, it is perhaps this same quality that we are growing weary of; and so it might be time for Gunna to explore new sonic boundaries and push his own melodies even further if he wants to continue to evolve as an artist.